Warning: Use of undefined constant REQUEST_URI - assumed 'REQUEST_URI' (this will throw an Error in a future version of PHP) in /data/web/virtuals/39522/virtual/www/subdom/filler/wp-content/themes/book-rev-lite/functions.php on line 73
 27. 3. 2021 – GamingHub

What do you do when you need a unique sound? Smash some pianos, apparently. At least according to the team over at 343 Industries. In a new video, the studio revealed how Halo Infinite devs smashed a piano to smithereens in order to make some unique sound effects. Oddly enough, this isn’t the weirdest thing done to get game audio, but here we are.  Have you ever been so mad you just wanted to break something? I can’t speak for others, but I’ve definitely been there before. If you’re like me, definitely watch the video below, because it is incredibly satisfying:  Click here to watch embedded media In the above footage, the team can be seen getting their audio goods via getting a little smash-happy with hammers and other blunt objects. But it wasn’t just a blind smash and grab, the team also shared how they used a subwoofer on the piano itself before the destruction began in order to use it like a resonator. Then it got a little weird… To get more than just the normal sounds one would expect from the destruction of an innocent piano just minding its own business, the team also put dry ice on…

The PC version of Crash Bandicoot 4 launched exclusively on Battle.net yesterday – and players weren’t exactly thrilled to discover it’s always-online. Crash Bandicoot 4, which does not have any online multiplayer, requires an internet connection to play on PC – as seems to be standard practice with Battle.net games. Players have reported issues with this requirement, such as login errors that force the game to close. These login errors reportedly present themselves even when your internet drops while playing. It also means that any issues Blizzard experiences with its authentication servers could make the game unplayable. Read more 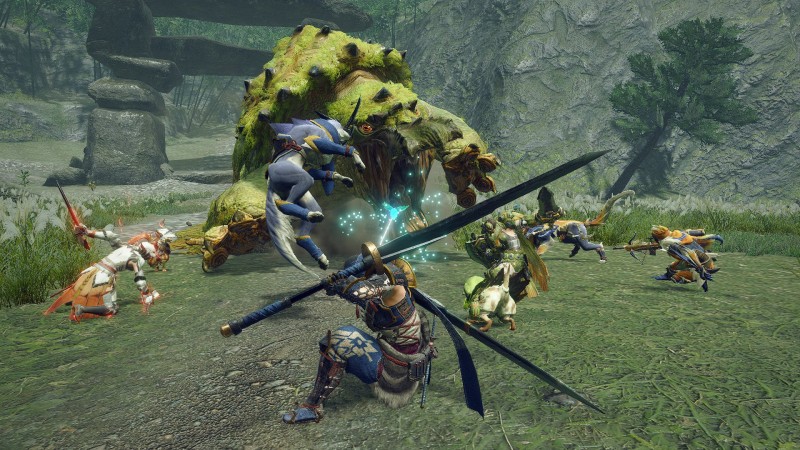 Click to watch embedded media The latest chapter in the Monster Hunter series launched yesterday. We know that a large majority of players will likely be returning veteran hunters, but let’s not just forget about the novice adventurers who might struggle with the series’ (sometimes) harsh difficulty curve. Join us as we get you up to speed on some of the most important tips that you’ll need to get started in Monster Hunter Rise. Capture Monsters Instead Of Slaying Them  Here’s a classic Monster Hunter tip: Stop killing everything that moves (especially your larger, more ferocious opponents). The rewards that you gain at the end of each quest determine the equipment pieces that you can forge back in Kamura Village. Capturing your prey can net you some exclusive materials in addition to your normal haul.  I’ll be the first to admit that outright obliterating monsters (especially that pesky Somnacanth) is cathartic as hell. But if you’re looking to get more bang for your buck, equip yourself with a trap or two and a couple of tranq bombs (or tranq rounds if you’re a bowgun main like me). When your target monster is weak enough, place a trap in its path and…

THQ Nordic is taking on the long-running Football Manager series with a football management sim of its own it describes as “a throwback to classic traditional management games”. We Are Football is from German studio Winning Streak Games. It was co-founded by Gerald Köhler, the creator of the On the Ball football manager series, which was a big hit in Germany in the early ’90s. The debut We Are Football trailer is below: Read more 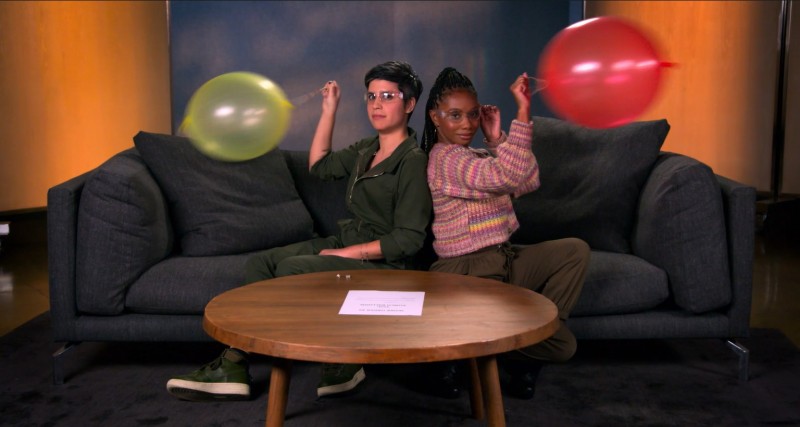 Click here to watch embedded media Mythic Quest: Raven’s Banquet is an Apple TV+ comedy that showcases the inner workings of a fictional studio striving to keep its successful MMORPG on top, and it comes from the minds of It’s Always Sunny in Philadelphia’s Rob McElhenney, Charlie Day, and Megan Ganz. The first season was an interesting look at the trials and tribulations of game development, using smart comedy to tackle some of its growing issues. Season two is headed our way on May 7 and focuses on the zany game development team returning to the office after quarantine and trying to launch an expansion for their beloved MMORPG. Ian and Poppy are now both co-creators, but can they really work together, or are they destined to butt heads and drive each other crazy?  In anticipation of the new season, two of its stars decided to have some fun to celebrate. Actresses Ashly Burch (Rachel) and Imani Hakim (Dana) play game testers on the show, but they decided to put down their controllers and test more traditional games like paddle ball and cup stacking. Watch them deliver their verdict on these famous pastimes, rating things like “bounciness” and “fun.” As expected, a lot of laughter… 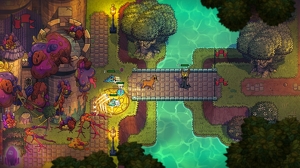 Microsoft held an ID@Xbox showcase last night, and as part of it listed 22 games coming to Xbox Game Pass. Some of the games in the list below are already out on PC (Art of Rally, for example), and some we already knew were set to launch into Xbox Game Pass at launch (Narita Boy, for example). But there are 15 additions here, including the just-announced Nobody Saves the World, so it’s well worth shining a light on what’s coming down the content pipe. My personal highlights here are Art of Rally, which Martin had good things to say about in our review, 1980s-themed side-scroller Narita Boy, which I’ve had my eye on for some time now, and Stalker 2, which is doing interesting things with its teeth. Chris Tapsell previewed Drinkbox’s Nobody Saves the World yesterday, saying it “has all the lurid zip and levity of Guacamelee, with an RPG twist”. And Emma was positive about Recompile, “a Metroidvania that makes hacking look beautiful.” Read more

Rust Console Edition launches 21st May on PlayStation 4 and Xbox One. Double Eleven, the Middlesbrough-based developer and publisher of Rust on console, said the standard edition costs £39.99. The deluxe edition, which costs £49.99, includes three days of early access, closed beta access, staging branch access, the Welcome Pack, and the Future Weapons and Tools Pack. Then there’s the £69.99 ultimate edition, which includes everything in the deluxe edition but also an upgraded Welcome Pack, 1100 Rust Coins, and an Elite Combat Skin Pack. Read more

As a Mauritian who loved Super Mario Sunshine back in its day, I could already see the many similarities Super Mario Sunshine has to Mauritius. Sunshine is a game that sold relatively well but remains divisive amongst Super Mario fans. The game starts with Mario, Peach and Toadsworth arriving on Isle Delfino where they aim to enjoy a nice relaxing holiday. This of course is not what happens, and Mario is soon framed and wrongly imprisoned for spreading a goop-like substance and attendant monsters across the island. Mario the polluter! It’s then Mario’s task, and yours, to clean up the island with his new mechanical water shooting weapon, F.L.U.D.D. The tropical island setting, the happy inhabitants, the holiday destination feel. How could I not think of Mauritius? I return to my very own Delfino Island of a home country every other year – apart from last year for the obvious reasons. And this is where it gets spooky. It may be a stretch to say that a decades old Mario game predicted exactly what happened in Mauritius last year, but the more I look into it…? Read more

The Nintendo 3DS launched March 27, 2011 in the U.S. The handheld fulfilled its promise of offering glasses-free 3D gameplay and while the feature itself may not have caught on, the platform wound up accumulating a great library of games anyway and had one heck of a lifespan to boot.  To mark the occasion, we decided to give our original list of the 3DS’ 10 best games a serious facelift. Doing so allows us to include quality games that were released after this article was originally published in July 2017 as well as reflect the tastes of our newer staff members.  Just like in our Top 10 list of PlayStation 4 and Xbox One games, we will not be ranking the titles on this list. We consider everything listed here to be a must-play experience and so we’ve instead arranged them in reverse chronological order, meaning it starts from the most recently released title to the earliest.  So without further ado, here is Game Informer‘s definitive top 10 games for the 3DS.  Pokémon Ultra Sun/Ultra Moon Release: November 17, 2017 Ultra Sun and Ultra Moon took an already great Pokémon experience in Sun and Moon and made it even better. Everything that worked about its… 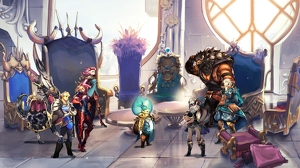 Artisan Studios has unveiled Astria Ascending, a new Japanese-style RPG being developed in conjunction with Final Fantasy 7 writer Kazushige Nojima and FF12 composer Hitoshi Sakimoto. Astria Ascending casts players as one of the eight demigods – guardians of Harmony charged with protecting the world of Orcanon from the mysterious Noises. There’s plenty more scene-setting in the trailer below – including mention of the delightfully named “Harmelon”, an instinct-suppressing melon used to maintain harmony across the land – but the gist is that it’s a side-on, turn-based RPG with some very nice hand-drawn art. Read more